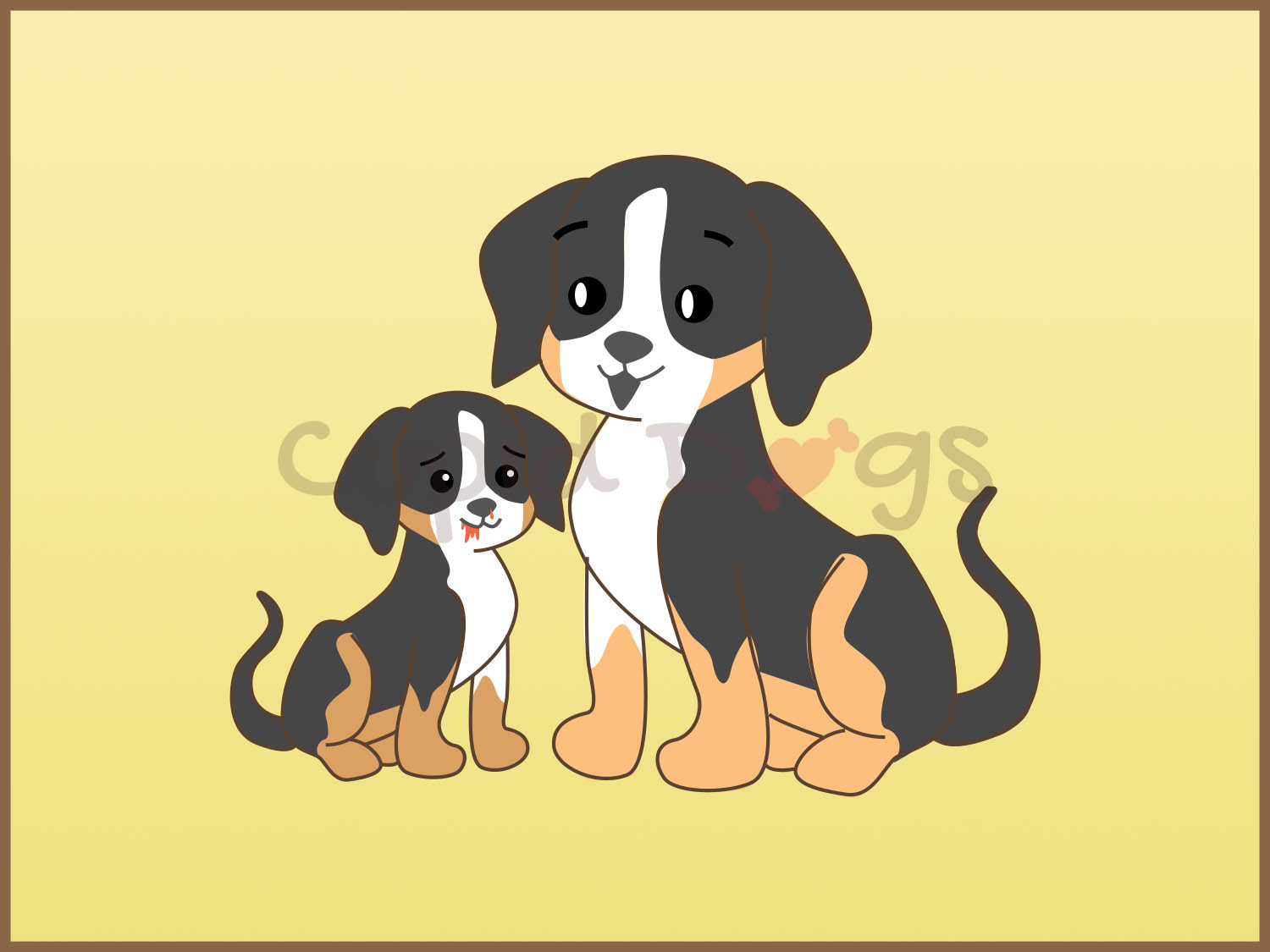 If one of your newborn pups is bleeding from the nose and mouth, then it is a pretty obvious sign that it is unwell.

There are many conditions which may have caused this symptom in newborn pups, but whatever the underlying cause, the pup needs to see a veterinarian as soon as possible.

In this article we will take a look at the most common causes of bleeding from the nose and mouth in pups, other symptoms they might show and also the diagnosis and treatment options.

If your dog has just given birth to a litter of newborn puppies it can be an exciting yet nervous time for you.

The first few weeks of the puppies’ life’s they are pretty helpless and totally dependent on their mothers, due to their small size, developing organs, immature immune systems and inability to regulate their own body temperature.

That's why in this time they are at risk of becoming ill for all sorts of reasons.

If your puppy is sick what symptoms will he show?

Bleeding from the nose and or mouth is just one possible sign that a newborn puppy might show if he is ill. It isn’t a very common symptom in pups.

This might be the only symptom that a puppy shows, or he might show other signs of sickness too. Therefore, you should be aware of other common symptoms of illness in newborn puppies, including:

Causes of bleeding from the nose and mouth in newborn pups?

If your mother dog had a difficult birth, prolonged labor or an emergency caesarean, then the newborn pups may be born weaker than normal.

If the puppy was stuck in the birth canal for longer than normal, or it had to be manually manipulated to help it leave the birth canal (by you or the vet), then it may have suffered some injuries.

Any type of difficult birth, means the puppy could have received less oxygen than normal and put it at risk of organ damage and weakness.

Unfortunately, injury due to a trauma is pretty common in newborn pups. They can’t move very well, and once they get stuck somewhere they can’t always wriggle free.

The mother dog can also accidentally lay on top of the pups while they are feeding, causing injury or even death. The pups can also easily fall down stairs, get accidentally stood on by owners or even closed in doors- these can potentially cause life threatening injuries and possible bleeding from the nose or mouth.

Canine herpesvirus (CHV) is a serious, often fatal viral disease of newborn puppies. It is often listed as part of the “fading puppy syndrome”, when puppies that appear apparently normal at birth die within the first few weeks of life. Puppies can become infected in the uterus, during birth, or after birth by inhaling the virus during contact with other dogs.

Some puppies with this infection might just pass away suddenly, others may become dull and quiet with a reduced appetite and problems breathing. In some cases, the virus can cause eye problems or attack the internal organs and cause bleeding from the mouth and or nose.

A coagulopathy is the fancy way of saying a bleeding disorder, a condition in which a dog’s blood cannot form normal blood clots. If the dog can’t form clots, then this can lead to excessive bleeding if the dog is injured.

If a pup accidentally ingests some types of rat poisons, then it could result in a coagulopathy, and cause symptoms such as weakness, vomiting, bleeding from the nose and mouth or collapse.

Certain types of rat poison, ibuprofen (an over the counter pain relief for people), xylitol (found in sugar free gum, tooth paste and some human foods) or some human medications, can all cause blood clotting problems if a dog ingests them. It is important to make sure your home is safe for curious little pups on the move!

A congenital defect is an abnormal condition that a puppy is born with. The abnormalities can involve any organ or part of the pup’s body.

Sometimes the problem is minor (e.g. polydactylism or extra toes), while others may prevent the pup’s normal development or even cause early death (e.g. cleft palate or a heart defect).

Some defects are obvious at birth, others may remain hidden for days, weeks or even months!

One possible cause of a puppy bleeding from the mouth or nose is a congenital clotting defect, caused by a deficiency in the proteins needed for the blood to lot properly. This can lead to the puppy having uncontrolled bleeding if it injures itself.

There may be no known cause for the congenital defect, or it may be inherited from a parent, or due to the mother being exposed to certain infections or medications during her pregnancy.

Unfortunately, newborn pups are at a high risk of catching viral, bacterial and parasitic infections. They are born with weak immune systems and depend on antibodies (disease fighting proteins) being passed from their mum in the colostrum.

Colostrum is the antibody rich, high energy milk produced by the mum dog in the first day or so after birth.

If pups don’t receive this important colostrum, they are at a much higher risk of getting sick. We have already discussed one of the most common infections in new born pups, the Canine herpes virus infection.

However, other life threatening viral infections include canine parvovirus and canine distemper. Common bacterial infections which can cause serious disease in newborn puppies include Escherichia coli, Staphylococcus spp. and Streptococcus spp.

Diagnosis of a bleeding puppy

A newborn puppy that is showing any signs of sickness should be brought to a veterinary clinic straight away.

Newborn puppies often require immediate veterinary care to try to save their lives if they are very sick. At this young age puppies are very prone to hypothermia (low body temperature), hypoglycaemia (low blood sugar levels), injury and infectious diseases.

The veterinarian will take a history and perform a full clinical examination on the bleeding puppy. They will check things such as the colour of the gums, the heart rate, breathing rate and effort, abdominal (tummy) palpation and rectal temperature.

They will also look for obvious injuries to the mouth, nose or body which could be causing the bleeding, and check for signs of bleeding elsewhere in the body e.g. skin bruising, bruising on the gums.

Further diagnostic tests that may be recommended might include:

Puppies that pass away suddenly can have a post mortem and further tests carried out to try to figure out what caused the problem.

As difficult as this can be at the time, it is often a good idea to get a diagnosis, so you can try to protect your other newborn pups.

Treatment options for a bleeding puppy

Treatment depends on the underlying cause of the bleeding and how sick the puppy is. In some cases of serious bleeding in a newborn puppy, the puppy may pass away quickly even before veterinary help can be sought!

Often a sick puppy needs to be kept warm and fed frequently with a milk replacement (if it can swallow) if it is separated from it’s mother, and often placed on intravenous fluids to prevent dehydration.

If a mild nose or mouth injury has caused the bleeding, the pup may just need supportive care and time to fully recover.

If the puppy has suffered a more severe head or body injury, then it may require intensive treatment with intravenous fluids, medication to control swelling of the brain, pain relief, anti-inflammatory medication, antibiotics or surgery to correct any damage.A feeding tube may need to be placed to feed a puppy regularly, if it can’t eat itself.

If the puppy has eaten an anticoagulant rat poison, then it will require vitamin K treatment for a few weeks.

If the puppy is actively bleeding, it may require a blood or plasma transfusion to replace the required clotting factors and red blood cells.

Canine Herpesvirus is notoriously difficult to treat in newborn puppies; as most infected puppies will unfortunately pass away.  Supportive care may include keeping the puppy, warm, administering intravenous fluids, antibody serum, anti-viral medication and antibiotics for secondary infections.

A newborn puppy that has blood coming from it’s nose or mouth needs emergency veterinary treatment straight away. Don’t wait around to see if the puppy gets better, there is a chance the puppy could quickly pass away.

Many causes of bleeding in newborn puppies can be difficult to diagnose and treatment may be a challenge. If an infectious disease has caused the problem, it usually puts other pups in the litter at risk too.

Although it can be a very difficult decision at the time, if a puppy passes away suddenly it is often a good idea to have the vet carry out a post mortem and submit samples to try to figure out what caused the problem.

That way you can try to protect the other puppies in the litter, and hopefully prevent further puppy deaths in the future.

My name is Maureen and Bella is my female, American Bulldog.  Me and my husband bought her from another breeder, when she was around 6 months old (sometime around October 2015) with the intention of having her as a companion because we both love dogs….Read More